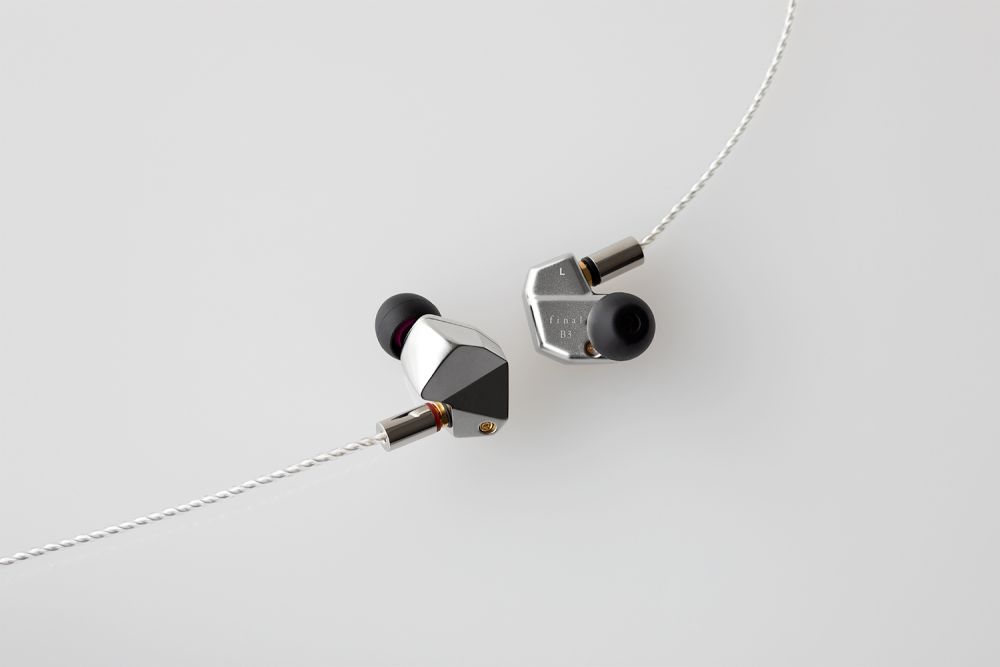 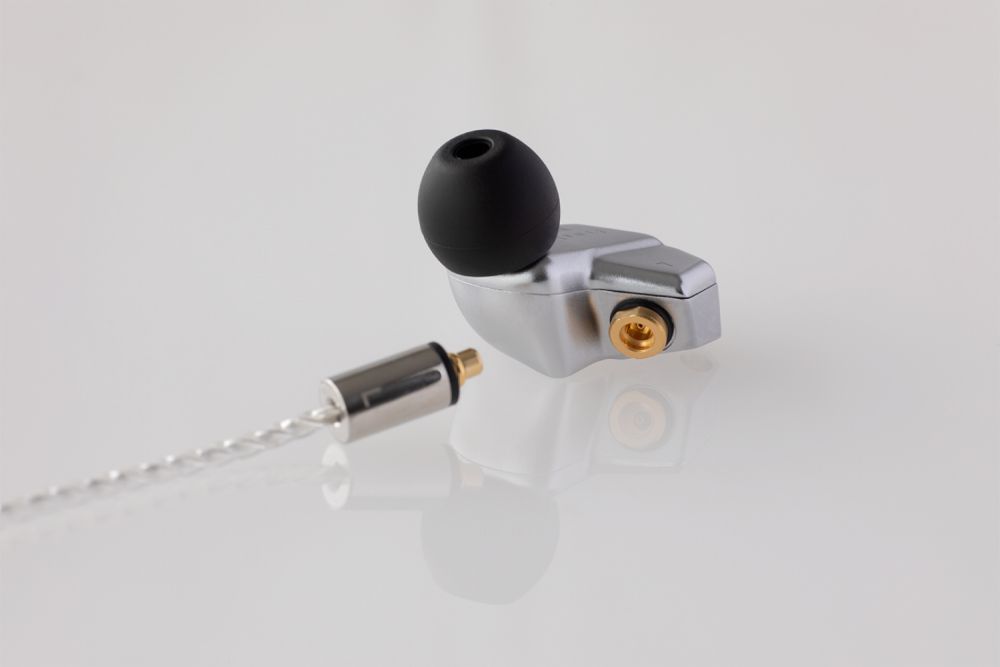 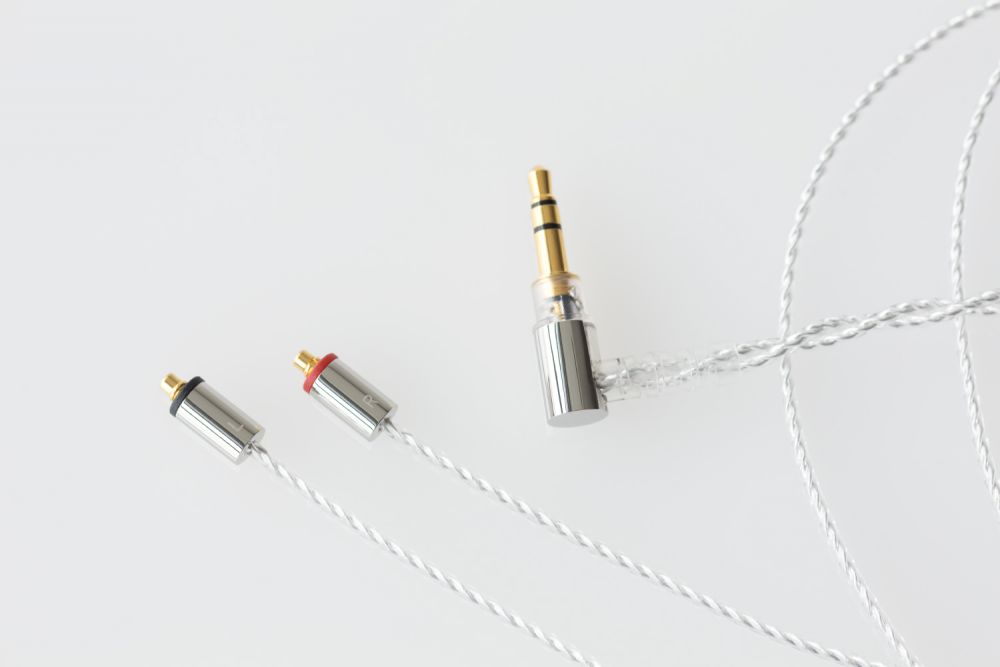 The Final B3 model was designed with particular emphasis on clarity. It caters to those who wish to have the delicate sound of each musical instrument delivered gorgeously even from live recordings, and enjoy tight vocals from animated soundtracks and EDM. It comes equipped with a standard silver coat cable and employs an MMCX connector that makes it possible to switch cables in the event of a severed connection.
Eine Demo reservieren

Features:
Sound design with consideration to the relationship between the spatial impression and dynamic range of music as well as the physical characteristics of earphones and headphones. Sound design for these models has been undertaken with attention to the relationship between spatial impression and dynamic range of music, and the physical characteristics of earphones and headphones. We have categorized sound creation on music recording onto these two axes: spatial impression and dynamic range. One way of thinking regards the distance perception. Classical and jazz recordings are thought to be performed with emphasis on aspects of spaciousness, such as sense of distance, broadness and reverberation. On the other hand, rock, pops and many of the recent animation soundtrack recordings, spaciousness is not as highly emphasized. There is thought to be greater emphasis on clarity, which brings the various instruments and vocals to the front. Another approach is dynamic range - in other words, changes in loudness over time. If the dynamic range is wide, naturally it is possible to use the change in loudness over time to achieve a more dynamic expression of music. But, there are some types of music for which narrower dynamic range recordings are preferable to allow each of the instruments and vocals to ordinarily appear before the listener’s eyes.
The difference between these two ways of thinking pertains not to which is superior but rather differences in how music is composed and what is demanded of it. With regard to classical music, and that played by orchestra in particular, the spatial orientation of instruments is particularly important. Stringed instruments are positioned nearest to the audience with wind and percussion placed behind them. Should the balance between the spatial orientation and volume of each group of instruments collapse, the music would disintegrate. For that reason, uniform clarity of sound that allows each instrument to appear before the eyes of the listener is not demanded of this type of music. Even for classical music, a string quartet, for example, would have a narrow dynamic range and the clarity of each instrument would be more prominent. For rock and pops on the other hand, spaciousness is not as necessary as for classical music, and so there is greater emphasis on clarity than spaciousness. These preconditions are very important, particularly for earphone and headphone listening, and it has become apparent that the implementation of appropriate target curves and driver design result in
deeper enjoyment of music. Please refer to the below graph with spaciousness and clarity of music set on the X axis and dynamic range set on the Y axis. Whereas our E3000 model was designed with aim at the very center of the graph, the B series is positioned outside that area. In other words, in comparison to the E series, the B series is positioned more as a model to listen to a specific type of music, and you might become so enthralled with it that you can’t do without it. This attraction is typical of the products we produce.

The Feeling of a Customized Fit:
Superior feeling of fit of an earphone is determined by the presence or lack of a feeling of pressure. There are products on the market with an ergonomically praised organically curved surface that should be suitable for placement somewhere in the ear, but because the holding positions for those shapes place pressure on the ear, fatigue accumulates over time. As a result of having newly returned to the basics with regard to our thinking about fit with little sense of pressure, we have arrived at a way of thinking that involves 2 holding positions and 1 assisting position so as to not slip out. Much the same as a tripod, a stable fit can be secured for any chassis with 3 holding positions. In the green section of the diagram below (earpiece) is 1 position, the blue section (Tragus) is 1 position, and the pink colored section (cavity of the concha) is 1 position for a total of 3 positions. The tragus secures an earphone with an earpiece in such a way that makes it difficult to feel stress even when force is applied, and the pink section adopts a fit method in which the earphone is supported in place by the cavity of concha in such a manner as to not slip out. By clearly identifying the points of contact, more people’s ears can conform to a fit with no sense of pressure. If there is no sense of pressure, the fit of the earphone will be felt to be that much more comfortable, and in this way, it achieves the superior fit of a seemingly customized earphone.

Metal Injection Molding (MIM) stainless steel housing:
MIM is a process by which powdered metal is mixed with a binder to form a resin in the desired shape and applying high-temperature sintering to achieve the desired form.

MMCX Connector＆Original high purity OFC silver coated cable:
The MMCX connector was developed in-company. We've used high-purity OFC silver coated cables that provide a wide sound stage. These jointly-developed cables were originally designed by and are currently manufactured by the well-renowned Junkosha corporation for the purpose of being used with the supercomputer "Kei" due to their fast signal transmission speed. The insulator film is made from PFA which was also developed by Junkosha who used their extensive know-how through the JUNFLON® brand to create the ultimate in low-permittivity material. The outer tube is made from PVC for maximum flexibility. The user will experience surprising flexibility that both makes the cable extremely easy to use as well as reducing the likelihood of microphonics. In addition, the MMCX plug and the 3.5 mm mini-plug have a tendency to disconnect so we've far exceeded the regular QA pass criteria of a 5,000-time bend test by changing the connection design to one that can withstand more than 50,000 bends.
* Junkosha: The Japanese corporation Junkosha develops and manufactures products such as high speed coaxial cables that boast the world's fastest transmission speed at 95% the speed of light, as well as cables for demanding fields such as marine and aerospace, healthcare and power generation facilities. These special cables require a high level of technology and center around fluoropolymers. Junkosha's cables are often called by the brand name JUNFLON® and have earned the tremendous trust of engineers requiring special-purpose cables.

Original earpieces with a color difference between the left and right bushes.
Two types of silicon differing in rigidity are employed for the sound conduit and for the earbud that comes into contact with the user’s ear. The silicon used for the sound conduit is more rigid than that used for the earbud, and by having groove processing applied to it, combines both strength and flexibility. Soft silicon has been employed for the earbud, making for a comfortable fit and a high level of sound insulation. One of the bushes is gray, while the other is red; by pulling the earpiece back slightly to check the color of the bush, it is easy to distinguish between left and right, even in places with subdued lighting. Since the bush colors of neighboring sizes are different (the gray bushes alternate between dark and light gray; the red bushes alternate between red and pink), it is also easy to distinguish between sizes.

Ear hooks that alleviate cable touch noise
With similar existing products, it was assumed that they would be fitted to ears of differing sizes; not only were they large in size, their appearance was rather too distinct, and it took a lot to get accustomed to fitting them. Having considered what the key to fitting the ear hooks was, we discovered a form that was smaller than existing ear hooks, that didn’t utilize metal or resin wires and fit the ears of more people. We’ve achieved something that is slim and does not have a foreign feel to it, making for the kind of comfort that has you forgetting you’re wearing them. There’s also no problem with combining it with a figure 8 cable. Cable noise – the unpleasant noise that occurs when the cable touches the user’s body when they are walking – is dramatically reduced.

Aging:
Aging is a phenomenon by which sound changes by continued use over a certain period of time. A driver unit produces sound through the vibration of an extremely thin heat-formed film. The cause is not clear, but it is thought that the film might become accustomed to the stress applied from the forming of the film or stress from the adhesive through continued use over time so that minute signals can be transmitted easily. A long period of time is required before the aging effects on this product become unnoticeable. Generally, through 150 to 200 hours of ordinary use sensitivity increases to achieve the level of sound quality for which the product had been originally designed.